Vattenfall is building a new wind farm in the North Sea. This is the Hollandse Kust Zuid Wind Farm. You can find all information about the wind farm here.

In order to actually realise this transition in energy supply, the government regards wind energy generated offshore and on land as playing a key role. Offshore wind farms are important as the wind is at its most powerful there and the wind turbines create the greatest output. By 2023, offshore wind farms will have to be supplying 4,500 megawatts (MW) of power. At present, this stands at 1,000 MW in the Netherlands.

The government decides where wind farms will be built and who will build them. One of the locations is Hollandse Kust Zuid. This site is 18 kilometres off the coast, in the area between The Hague and Zandvoort. The government has chosen this site due to the suitability of the seabed, the ideal weather conditions, limited depth of water and the proximity of the port of IJmuiden. 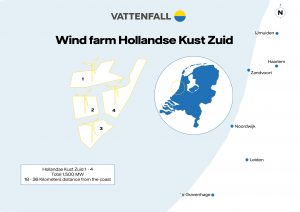 Hollandse Kust Zuid Wind Farm will be built without any government subsidy. This is something special, as it will be the first subsidy-free wind farm in Europe. The costs of offshore wind energy have dropped dramatically in the last few years due to rapid developments in the market. Vattenfall will be able to complete the project without the financial help of the government as the government guarantees the licence and network connections in their tender. This means that the risks involved, and thus the inherent costs, have dropped dramatically.

Job opportunities
The development of the Hollandse Kust Zuid offshore wind farm creates a lot of employment opportunities, from soil investigations and the manufacturing of turbine parts, to installation and the Operations & Maintenance of the wind farm. On our career site, you will find an overview of current job openings.

Nature and the environment

The licence issued by the Dutch government to Vattenfall includes regulations and measures that have to be taken to ensure that local ecology suffers the least amount of disturbance from the wind farm. These measures apply to both the construction period as well as the operational phase of the wind farm.

These measures are currently being concretized in both the wind farm’s design process and the way in which the wind farm will be built and operated. Vattenfall has a great deal of (inter)national experience in this field. For instance, the Egmond aan Zee Offshore Wind Farm is linked to a comprehensive monitoring and evaluation program: NSW-MEP. This program is carried out in cooperation with leading research institutions and focuses on ecology and technology. The results revealed higher porpoise numbers in the farm than outside of it. The wind farm proved to be beneficial for the Great Cormorant as well. Cormorants need to dry their feathers after fishing, which can be done easily at the windmill platforms.